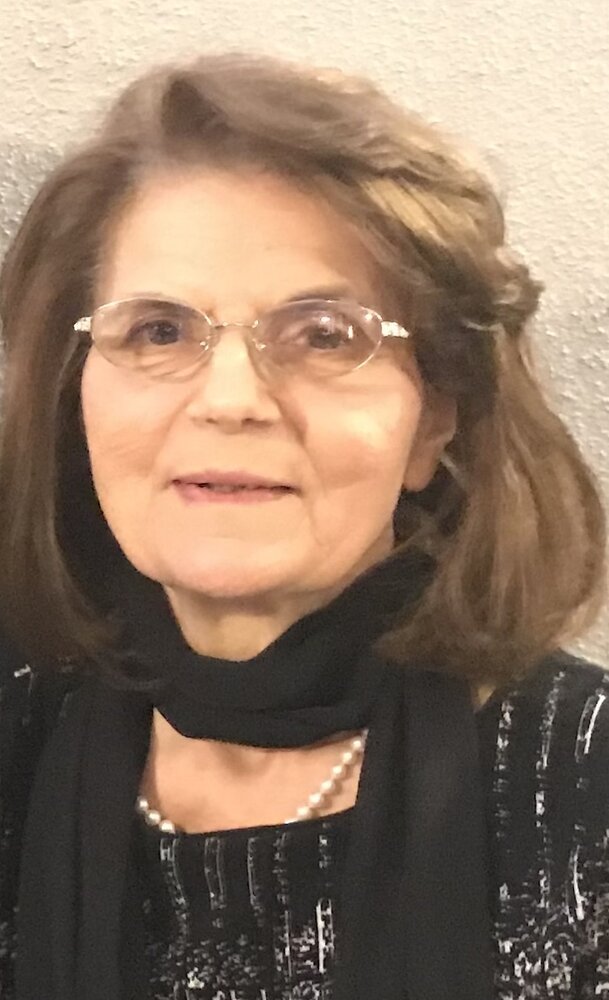 Please share a memory of Athanasia to include in a keepsake book for family and friends.
View Tribute Book

Athanasia ("Nancy") Lambrou - loving wife (to Evangelos [“Angelo”]), mother (to Sophie and George), mother-in-law (to Brian and Alexandra), grandmother (to Nathaniel, Jack, Alice, William and Evan), sister, sister-in-law, aunt, cousin and godmother - fell asleep in the Lord on Tuesday, January 24, 2023 at the age of 74 in New York City.

Born on November 28, 1948 to Konstantinos and Evangelia Panagiotou in Karystos, on the island of Evia in Greece. She was the youngest of six children, with four sisters and one brother. From an early age, she highly valued and prized family and education. She moved to Athens at the age of eighteen, attending architecture school and working at a shipping office in the nearby port city of Piraeus.

Nancy married her adoring husband, Angelo, in October 1978, before spending the early part of their marriage on the island of Corfu and giving birth to their daughter, Sophie, in Athens in September 1979. . In 1982, they moved to New York; within days of arriving , Nancy was standing in line with her toddler at the registrar's office of Queens College to enroll for a bachelor’s degree program - such was her love of education. In November 1985, Nancy gave birth to her son, George. She would subsequently go on to obtain her master's degree from Queens College. She was a New York City public school teacher and also played an active role in her family's real estate development and investing (putting her architecture schooling to good use). She stepped away from teaching shortly after becoming a grandmother in 2009 and spending her retirement years enjoying time with her five adoring grandchildren.

Selfless and generous, Nancy endlessly loved, doted on, and supported her husband, children, and grandchildren. She was a sophisticated and dynamic – and yet soft-spoken - woman, who had a unique combination of elegance, wisdom and strength. She cared deeply for her children's and grandchildren's well-being and education.

A lover of the arts and history, Nancy would often visit museums, and attend concerts and plays with her husband and children; examples of her many generous gifts included tickets to Andrea Bocelli and The Nutcracker. Nancy was well-travelled and loved exploring new countries. She was also highly active in the community and would often donate to causes to help children in need.

Nancy epitomized "filotimo" - an untranslatable Greek concept literally meaning "love of honor" - that represents virtues including dignity, self-sacrifice, respect, gratitude, and hospitality. She valued and respected other people's opinions and beliefs, while at the same time eloquently imparting her wisdom and advice to help others. She enjoyed hosting gatherings and ensuring her guests always felt adored and appreciated.

Nancy was infinitely loved and will be profoundly missed by her family and friends.  Visiting hours will be held at Fairchild Sons Funeral Chapel (1570 Northern Boulevard, Manhasset, NY) on Thursday, January 26, 2023, from 2-4 pm and from 7-9 pm. Funeral services will be held at The Archangel Michael Greek Orthodox Church (100 Fairway Drive, Port Washington, NY) on Friday, January 27, 2023 at 10 am.  Interment will follow at Nassau Knolls Cemetery (500 Port Washington Boulevard, Port Washington, NY).

The family welcomes donations in Nancy’s memory to St. Jude’s Children’s Research Hospital, The Archangel Michael Greek Orthodox Church, or a charity of your own choice.

Share Your Memory of
Athanasia
Upload Your Memory View All Memories
Be the first to upload a memory!
Share A Memory