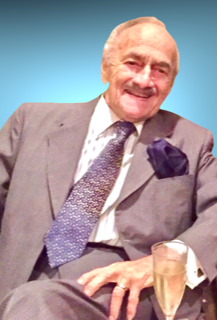 Please share a memory of Anthony to include in a keepsake book for family and friends.
View Tribute Book

While he was a successful businessman, he would tell you it’s his family he was most proud. He had a gift for conversation, was a kind, gentle man and a wonderful storyteller. As a young boy who played ball on Ebbets Field, he shared many stories about the time he had a catch with Babe Ruth. Anthony’s legacy is his faith, devotion to family and integrity.

Anthony attended NYU and was a member Emeritus of Illuminating Engineering Society since 1953. From a young age he was industrious. He delivered ice as a young boy of 11 in his neighborhood, as a young man he worked as an engineer draftsman and established a metal foundry in Inwood, N.Y.. In 1956 he founded a lighting design and manufacturing company in Woodside, NY. As a designer and manufacturer of innovative commercial and industrial lighting fixtures, with many patents, his fixtures were specified by prominent architects and engineers for use in projects around the world.

During World War ll he designed and manufactured lighting fixtures which were selected to be installed on U. S. War Ships. Anthony was a prominent and well recognized manufacturer and businessman who was highly skilled in specially designed lighting for airports, art galleries museums, prisons, hospitals and many landmark buildings throughout the United States, Canada and Saudi Arabia of which he received many awards.

He enjoyed boating, traveling and was an avid swimmer and golfer. He was a member of NYAC and and the longest active member of Plandome Country Club since 1961. He has fond memories of playing golf at St. Andrews Links on several occasions well into his late 80’s with his son-in-law and grandsons. As an avid reader he kept current with politics, sports and medicine well into his early 100’s. He was parishioner of Saint Mary’s Church for over 70 years. He had a wonderful long life and for that we are thankful. He will be truly missed by his loving family and friends.

Share Your Memory of
Anthony
Upload Your Memory View All Memories
Be the first to upload a memory!
Share A Memory