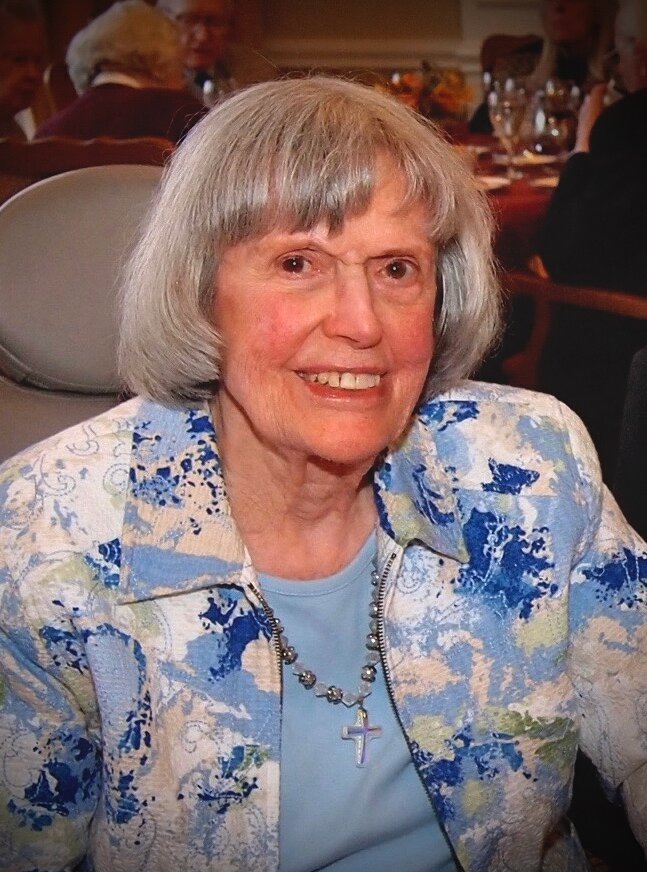 Frances W. Dwyer, 93, passed away peacefully in her home on November 30, 2021, after living an abundant, faith-filled life.

Born to George R. and Ruth S. Walker of Manhasset, NY, in June of 1928, Frances was the youngest of three children. Her sister, Dr. Ruth A. Walker, a college professor of organic chemistry, and brother George R. Walker, Jr., an international oil company executive, both predeceased her. Frances was known by different names over the years, including Frankie, Fran, Aunt Frannie, Mrs. Dwyer, even “Moose” by her beloved husband, and of course, Mom.

She was educated at The Vincent Smith School, The Greenvale School, where she was awarded the Derby Medal for courage, and The Spence School where she graduated high school in 1947. She then attended Wellesley College in MA, graduating in 1951 with a Bachelor of Arts.

After college she worked in the fashion industry due to the influence of her uncle and designer Mel Davidow, known for the “Davidow Suit,” and lived briefly on the island of St. Thomas, USVI. It was in these young adult years that she became active in The North Shore Ski Club, where she met her future husband and formed lifelong friendships.

On June 13, 1959, Frances married Gerald P. Dwyer, Jr. in the church of Our Lady of Fatima in Port Washington, NY, where they settled and raised their two children, David and Diana. Fran often was “class mother” at Daly Elementary School, just down the block from the family home. The Dwyers enjoyed ski vacations in the mountains of Vermont and sailing the Long Island Sound aboard Sea Wish for a few magical summers.

Following the untimely death of her husband and love of her life, Jerry, in 1978, Fran became more active in her Catholic faith by participating in Charismatic Renewal prayer groups and making pilgrimages to several sites of Marian apparitions, including Medjugorje, Bosnia and Herzegovina, Betania, Venezuela, and Conyers, Georgia. And Fran Dwyer also shared the gift of faith with others. She was a strong local advocate for Catholic media and played a part in transforming youth ministry in Port Washington by bringing Campus Life/Youth for Christ to the area. She also became a mother-figure and model of faith and service to many by opening her home, her backyard, and her heart to countless teens and young adults over the years.

She lived out her golden years at the “beautiful Peconic Landing” (her words) retirement community in Greenport, NY—a very special place which she made her home for 19 years, surrounded by new friends and truly amazing, compassionate caregivers.

She is survived by her son, Rev. David P. Dwyer, CSP, a Catholic priest with the Paulist Fathers, her daughter, Diana C. Dwyer and her partner in life Robert S. Fallon, and eight nieces and nephews.

In lieu of flowers, donations in Fran's memory may be made to East End Hospice. https://www.eeh.org/ways-to-give/donate/

Share Your Memory of
Frances
Upload Your Memory View All Memories
Be the first to upload a memory!
Share A Memory