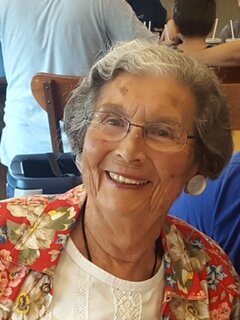 Wife, mother, schoolteacher, and devoted member of the Port Washington community, Maria Josephine Sottosanti Balletta entered into eternal life on the evening of October 14, 2021. She will be remembered by her family and friends as a gracious, kind, witty, and warm woman of deep faith.

Maria was born on August 29, 1929 to Michael and Marie Sottosanti. Along with her three siblings -- Perry, Vilma, and Vincent -- she grew up in Brooklyn and later moved to Long Island. Maria attended St. Angela Hall Academy and Marymount College. She taught grade school at the Kew Forest School in Queens and, later, at Main Street School in Port Washington.

Soon, Maria met the love of her life, Vincent R. Balletta, Jr. The two were wed on June 11, 1955 and provided a model of married love to their four children, to their extended family, and to their many friends. They made their home in Port Washington for their entire married life.

Vincent was a lawyer and a politician, serving on the North Hempstead Town Council, the New York State Assembly, the New York State Supreme Court, and the New York State Appellate Division. Through it all, Maria ran dozens of political campaigns; attended hundreds of coffee klatches and cocktail parties; frequented monthly meetings of the Lions Club, the Elks, and the Sons of Italy (to name just a few); marched in scores of Port Washington parades; and stood proudly beside her husband Vincent at each of his swearings-in.

Maria ran her household as deftly as she ran her husband’s campaign headquarters. She loved to cook, and family and friends were delighted to consume her mouth-watering meals. Beef-and-lamb stew was an election-night staple, and summer parties were famous for Maria’s Hawaiian chicken. For Christmas dinner, Maria teamed up with her mother and her mother-in-law to make the best lasagna on the planet, bar none. She als kept an impeccably clean home, with repairmen often wondering aloud if she ever used her kitchen appliances. She did. That’s just how immaculate her kitchen was!

To her four children -- Stephen, Richard, Michele, and Andrea -- Maria imparted a love of learning, a deep devotion to community service, an unshakeable set of core values, and her trademark wit and warmth. She exuded the same warmth and affection to her children’s spouses and to her eight grandchildren: James, Erin, Faith, Siena, Francesca, Matthew, Mark, and Jack. They all loved their “Grandma Bella” very much.

When Maria’s eldest child Stephen decided to become Marianist, Maria was the first to encourage his religious vocation. She is remembered fondly by the Brothers and Priests at Chaminade and Kellenberg Memorial High Schools.

Maria and Vincent were married for forty-one happy years. In 1996, cancer took Vincent’s life. Maria honored his memory by redoubling her involvement in Church and community organizations. She was a volunteer at St. Francis Hospital in Roslyn, New York, and served as one of the pillars of the Ministry of Consolation in St. Peter of Alcantara Parish. She attended daily Mass until congestive heart failure curtailed her lifestyle in her last years.

Maria traveled widely, first with Vincent, and, after his passing, with her close friends. Italy, Israel, Russia, Australia, New Zealand, and even Vietnam were among her globe-trotting destinations.

Through it all, Maria was a devout Catholic. Her deep and abiding faith in Christ, His Blessed Mother, and His Church sustained her in good times and in bad.

Maria died at her home at Harbor View, Port Washington, surrounded by her loving family: her four children; her devoted daughter-in-law Maryel; her eldest grandchild James; and her caring and compassionate aide of six years, Lyn.

In lieu of flowers, Maria’s family requests that you make a donation in her honor to one of your favorite charities

Share Your Memory of
Maria
Upload Your Memory View All Memories
Be the first to upload a memory!
Share A Memory