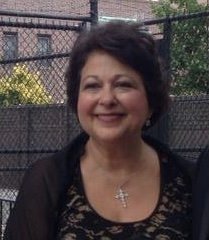 Teresa was born in Arnara, Italy to Maria Tiberia Viannesi and Antonio Viannesi. She was the younger sister of Anna Viannesi Rinaldi.

Teresa moved to the United States with her family in the early 1960s where they settled in Port Washington, New York.  She attended Daly Elementary School, Sousa Junior High School and Schreiber High School.  She met Mario Staccone a few years later.  They fell in love and were engaged on her 21st birthday.

Teresa was a devoted daughter, sister, sister-in- law, wife, mother, grandmother, godmother, aunt and friend. She was a caring and compassionate woman who served as a pillar of strength to those who knew her.  She was known for her smile and caring demeanor which was cherished by all.

We have been heartbroken and devastated by her passing.  The expressions of gratitude that have been shown by so many since Teresa has left us has been overwhelming and forever appreciated.  We are accepting any form of expression that wish to be made in her honor including donation the the National  Arthritis Research Foundation which can be accessed by through the link below:

Share Your Memory of
Teresa
Upload Your Memory View All Memories
Be the first to upload a memory!
Share A Memory