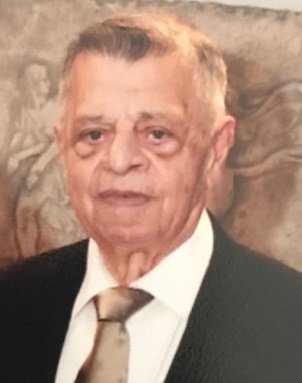 Our dad, grandfather, our Papou Lambros aka Louie immigrated to the US in 1954, at the age of 30, for a better life, as did many immigrants at that time. His parents had 9 children (5 girls and 4 boys), and he was the second youngest. His life in Greece was difficult as he was a farmer and helped his father to tend to the fields at a very early age. On the farm they grew tomatoes, cucumbers, watermelons, beans, wheat and olives, etc. He would often talk about the grueling work that was involved in farming in the hot sun, the endless hours spent at the olive press, and the process of guiding the bison around the press countless time to make olive oil. His mother would use this oil in all her recipes. Lambros, his father, and his brothers would also sell the oil the for extra money to support the family. Whatever oil remained that was not edible, they processed into soap. Not much waste in those days because every resource they had was precious, preserved, reused…the true sense of “being green”.

He came to the US without a penny in his pocket and was fortunate enough to have the support and love of his sisters Vasilia and Eleni who lived in Weirton, West Virginia. His family was always his foundation. He lived with Vasilia and her family for 8 years, which gave him the opportunity to build a nest egg. In the US he worked as a dishwasher, a painter, a janitor, and eventually a coffee shop waiter. He had a strong work ethic and would work 7 days a week, 16 hours a day for 8 years. During that time, he would always send money back to his mother to help support his family. In 1959 he took his first vacation back to Greece and his intent was to marry a girl who he liked, but never dated, because back then dating wasn’t allowed. He married our mother, Matrona after several months of being engaged in 1959. He returned back to the US immediately afterward and was finally able to bring her to the US in 1962. When she arrived to the US, he threw a big party to celebrate their wedding and their new life in the USA. Lambros and Matrona began their beautiful life together, started a family, and when Nancy Maria was a baby, they bought a one family house in Weirton in 1963. They decided to move to NYC, after being prompted by his brother, Nick (who had moved to NY several years prior with his family). They bought a 3 family house in Jackson Heights, NY in 1968.

Papou Lambros was a proud man who’s goal in life was to provide for his family and make sure that he would be able to retire comfortably. Although his schooling was only up to 6th grade, he was smart, goal oriented, hardworking and honest. He always had a plan. He worked tirelessly and was able to buy his first coffee shop in Rego Park with his nephew John in 1980 and then another restaurant in the Bronx in 1984 with John and another nephew, Sideri. Although he continued to work long hours and 6 days a week, he always found the time to take his family to the beach on Mondays (and on the way home always made a stop at Dunkin Donuts), took some time for family vacations to Greece, W.Va., the Poconos and Mattituck. He retired at the age of 62 and was able to enjoy his house in Mattituck, his children and his grandchildren. Unfortunately, his wife, Matrona passed away 15 years later at the age of 67, but he continued to enjoy life in a modest way, tending to his garden, going to the beach to fish, cooking, car-pooling and watching over his grandchildren Zefie and Louie and driving to Pennsylvania to spend time with his other grandchildren Faye, Stefen and Mattie and his daughter Daphne and son-in-law, Jimmy.

As he approached 90 years of age, he gradually had a harder time keeping up with all of these activities, but he was incredibly fortunate to have the have the help of his Mahi (1 year as Papou’s aide, but 20 years as babysitter/housekeeper-combined), Juliana (4+ years), Carolina (1+ years), Daisy and Meleni (more recently). He lived with his daughter, Nancy Maria and son in law, Steve, and their family. His Koumbaro George would visit him daily and they would sit and watch Greek TV and curse the Turks that always want to take a stronghold of Greece. His Koumbara Noula would send over treats and meals that he enjoyed eating and his nephews John, George and Anthony would come visit him frequently at home, talking about the old country and the family as a whole.

and when he died, life became hard on us. We will always remember Papou Lambros for his faith, his wisdom, his generosity, his humor and his values. He was one of a kind.

Other notable and funny things to remember Papou Lambros include:

-When in the Greek army, went AWOL for about a week because he had to help his family plow their fields in Chios. His “punishment” was a scolding and his sergeant put him in the kitchen where he started to develop his love of cooking.

-As a child, his classroom was full of 100 kids of different ages, with only 1 teacher and whenever the teacher would ask “who wants to go to my house and chop wood”, his hand would be the first one to go up because he was bored at school.

-He gave up English lessons in the US because he thought that his teacher “had the hots for him” and he didn’t want to marry a woman from the US because it meant that he would never see his parents again.

-He was respectful and demanded respect. One time he punched a guy out in the restaurant because he referred to him as “hey you”.

-He would sometimes ignore detour signs on the road because if he only knew one way to get to a place, he would ignore the sign (as long as he didn’t deem it to be dangerous). That, of course cost him a couple of tickets.

-His standard question to all his grandkids and their friends was “how’s your girlfriend” or “how’s your boyfriend”. To which he would then claim that he knows we have 2: 1 for the weekends and 1 for the weekdays

-He drove up until he was 88 years old and what made him stop driving, was not his small series of fender benders, but the last red light ticket that he got on Glen Cove Rd.. He just didn’t like wasting money,.

-He would barely raise the rent of his tenants through the years and when Steve took over that aspect of his business, he would say, “why are these people paying so little rent” and push him to raise their rents-I guess he didn’t want to be the “bad guy”.

-One time he made avgolemono chicken soup and used “baking soda” instead of “flour” and couldn’t figure out why he couldn’t get the soup to taste lemony. His grandson Louie however, ate 2 bowls of it anyway because it was so good, that he didn’t notice (That resulted in a call to his pharmacist son-in-law, Jimmy, to see if there was any ill effect in eating too much baking soda).

-He would say stuff like “if you didn’t load up 2000 lbs of potatoes on the farm, you didn’t work hard enough”.

-He would tell Zefie to give her brother money, because she “had a good job” and he was “jjust a student”.

-He would tell Louie, “Louie go get the gun” when his tenants showed up late with the rent money.

-He would always want his bills paid immediately upon receipt and would nag his daughter Nancy until she would have no choice but to cut the checks as soon as she arrived home from work.

-He would get Louie’s friends to de-weed his garden when they would come to Mattituck to spend the weekend….and they would do it...without complaining.

-He would always claim his tomato garden was the best and his cucumbers were the biggest.

-He would wake the family up every Christmas, by making rooster sounds...it reminded him of his childhood.

-He always wanted to treat everyone to food…even recently as he laid in bed, not able to move and barely speak, when family and friends were around him, he wanted to treat them to dinner and told Nancy to take his wallet out and buy dinner for everyone.

-He would always ask Julie, his God-daughter to pick up kaseri cheese for him from Astoria. It got to the point where she was picking up 3 lbs every two weeks, yet his cholesterol was still impeccable.

-He would love to give monetary gifts to his grandkids and his aides (since they had become family).

-He would give money to Noula to light candles for him at church. She lit his last candle last Sunday.

Today, let’s celebrate Papou Lambros’ life of 94 years as he passes onto Heaven to be with the love of his life, Matrona, his parents, his siblings and his extended family and with Jesus Christ. Thank you all for being here today and honoring his memory.

Share Your Memory of
Lambros
Upload Your Memory View All Memories
Be the first to upload a memory!