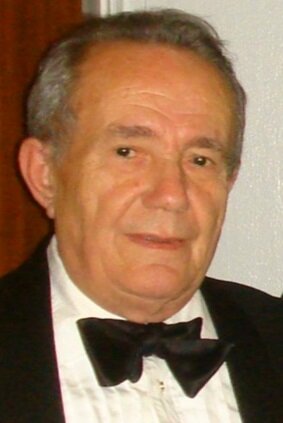 John P. Vellios—loving husband, father, grandfather, brother, brother-in-law, uncle and godfather—fell asleep in the Lord on Sunday, November 6, 2022, at the age of 88 in Manhasset, New York.

Born on September 21, 1934 to Lambrini and Panayiotis Vellios in the small village of Diplatanos in the mountains of central Greece, John had to grow up quickly. As a young boy, he witnessed poverty and hunger as Greece endured the Second World War and then the Greek Civil War. During this time, at the age of 8, he also suffered the death of his mother. He managed to graduate grammar school and then high school while working to survive and to help support his younger siblings amidst war, famine and instability.

Beckoned by uncles who had immigrated to the United States and fueled by a desire to find a better life for himself and for generations to come, John journeyed to America in April 1957. Here, he made the American dream his reality. After sailing from Greece to New York, John initially lived with and worked for his mother’s cousins, learning the florist business on which he would one day build his own successes and a beautiful life for his family. It was during this time that he also discovered his passion for New York City and for the theater, moving to Hell’s Kitchen with a group of his friends and performing with a small New York City theatrical group by night while waiting tables by day (and otherwise living “la dolce vita,” as he would say, with a wry smile and a twinkle in his eyes). He proudly became a United States citizen on June 13, 1961.

After some time in New York, John decided to return to Greece and get married. In August 1968, he was introduced to and (two weeks later) married Irene Maroudas, taking his young bride back with him to Brooklyn, New York. Having developed an entrepreneurial spirit, John then quickly embarked on a new journey when he purchased Rosedale Florist and a house with his wife in Manhasset, New York, where they ran their business, raised their family and lived for more than 53 years. Never one to seek any accolades, John sacrificed and worked tirelessly and selflessly for his family during the more than 40 years that he operated the business. Despite working six days a week and every major holiday, John loved to socialize, frequently hosting parties, family and friends at his home throughout the years.

Gentle, generous and soft-spoken, John was a man of strong faith, giving of himself to the church and to the Greek-American community. Together with a handful of other local Greek-American families, John helped establish Archangel Michael Greek Orthodox Church in Roslyn, New York, in 1981, where he was a long-time member and past President of the Parish Council. He stayed involved with the church throughout his life. Also important to John was instilling kinship within the Greek-American community. To that end, John also was a long-time member and past President of the Diplatanos Society-Agia Marina, Inc., a non-profit society dedicated to helping its members and their hometown village of Diplatanos, as well as a long-time member of the Order of AHEPA (American Hellenic Educational Progressive Association), the largest and oldest grassroots association of American citizens of Greek heritage.

John was a voracious reader (seldom was there a significant historical fact, philosopher or important work that he could not recall or quote from memory); a lover of languages, antiques and butter pecan ice cream; an unwavering fan of “The Gipper” (his politics and his movies); and a classical music afficionado (he was especially enamored of Maria Callas, Pavarotti and “Granada” by Joselito, whose voice in that song, he often marveled, “sounds like an angel”). With his dry sense of humor and good-natured bent, John also had a knack for conversation, often resorting to charming and old-fashioned expressions that belied a quiet wisdom and, at times, also helped him navigate potential conflicts with ease (“for crying out loud” being among his favorites in such scenarios). And if you ever encountered him at a Greek wedding, baptism or social event, you would know that he immensely enjoyed Greek folk music and was the first to take to the dance floor for the zeibekiko (Sfakianakis’ “O Aetos,” or “The Eagle,” was and forever will be his song). In his spare time, John also worked on his family genealogy and history, documenting oral histories and researching ancestors and distant relatives.

In the last decade of his life, John endured many health issues, including cancer and heart disease. While his heart ultimately may have failed, his spirit remained stubbornly strong and he was always fighting to sufficiently recover so that he could travel to Greece each summer, where he enjoyed spending time with family and friends by the sea at his apartment in Kamena Vourla, a seaside town in the suburbs of Athens.

John was preceded in death by his sister Maria and brother-in-law Athanasios Tsintzelis, as well as his brother Theofanis Vellios.

John was a very humble man, but he was exceedingly proud of his grandchildren, whom he loved deeply. John will be profoundly missed by them and by all others who truly love him—in them, the kindness of his huge heart, the twinkle in his eyes and the stubborn strength of his will live on forever.

Family and friends may gather for visiting hours on Friday, November 11, 2022, from 4:00-8:00 pm, at Fairchild Sons Funeral Chapel in Manhasset, New York, where a short memorial service (Trisagion) will take place at 7 pm.

Funeral services will be held on Saturday, November 12, 2022, at 10:00 am, preceded by an additional visiting hour at the church from 9:00-10:00 am. Burial will follow at Locust Valley Cemetery in Locust Valley, New York, with a luncheon (Makaria) to follow immediately afterward at Limani Mezze, 1512 Old Northern Boulevard, Roslyn, New York, where family and friends are all welcome to gather in celebration of John’s life.

May his spirit soar even as he rests in peace with the angels, and may his memory be eternal.