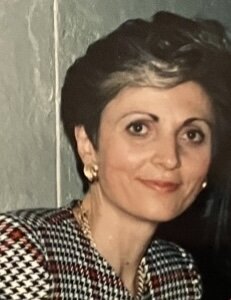 Please share a memory of Stella to include in a keepsake book for family and friends.
View Tribute Book

Stella Troulakis, age 69, passed away peacefully on October 16, 2022 in her home in Manhasset, New York. She was born on December 29, 1952 in Rodopoli, Serres, Greece to Ioannis Fokas and Anthoula Hatzistefanidou. She had one sister, Sofia. She married her husband, Dr. Emmanuel F. Troulakis on February 23, 1975 and immigrated later that year to New York. Together, they raised three children, Frank, Maria, and Joanna in Manhasset.

Stella cherished her family, both in the United States and in Greece. She loved spending summers in Greece with her children, parents, sister, nieces, and nephews. She was also very devoted to her Greek Orthodox Christian faith, being an active member of the Archangel Michael Greek Orthodox Church for many years. She had a sharp wit and a keen sense of humor, loving to tell jokes. She was known for her kindness and grace.

In August 1999, Stella was diagnosed with a very aggressive form of Multiple Sclerosis, which left her bedbound in 2004. She never complained as to why she was afflicted with such a debilitating disease, facing it with patience and courage for 23 years. She did not allow her tragic circumstances to embitter her. Instead, she spent her time listening to traditional Greek music, watching The Price Is Right, Wheel of Fortune, and Who Wants to Be a Millionaire?, completing Greek crossword puzzles, and playing the card game ξερή. She had a sweet tooth and loved milk chocolate, especially Hershey’s bars. Her greatest joys were being visited by family and friends and speaking on the telephone with relatives in Greece. She had a strong will to keep living due to her daily prayers with her κομποσκoίνι (prayer rope).

Stella is survived by her husband of 47 years, Emmanuel, son Frank, daughters Maria and Joanna, daughter-in-law Romina, and son-in-law George.

In lieu of flowers, donations may be made to :

Share Your Memory of
Stella
Upload Your Memory View All Memories
Be the first to upload a memory!
Share A Memory