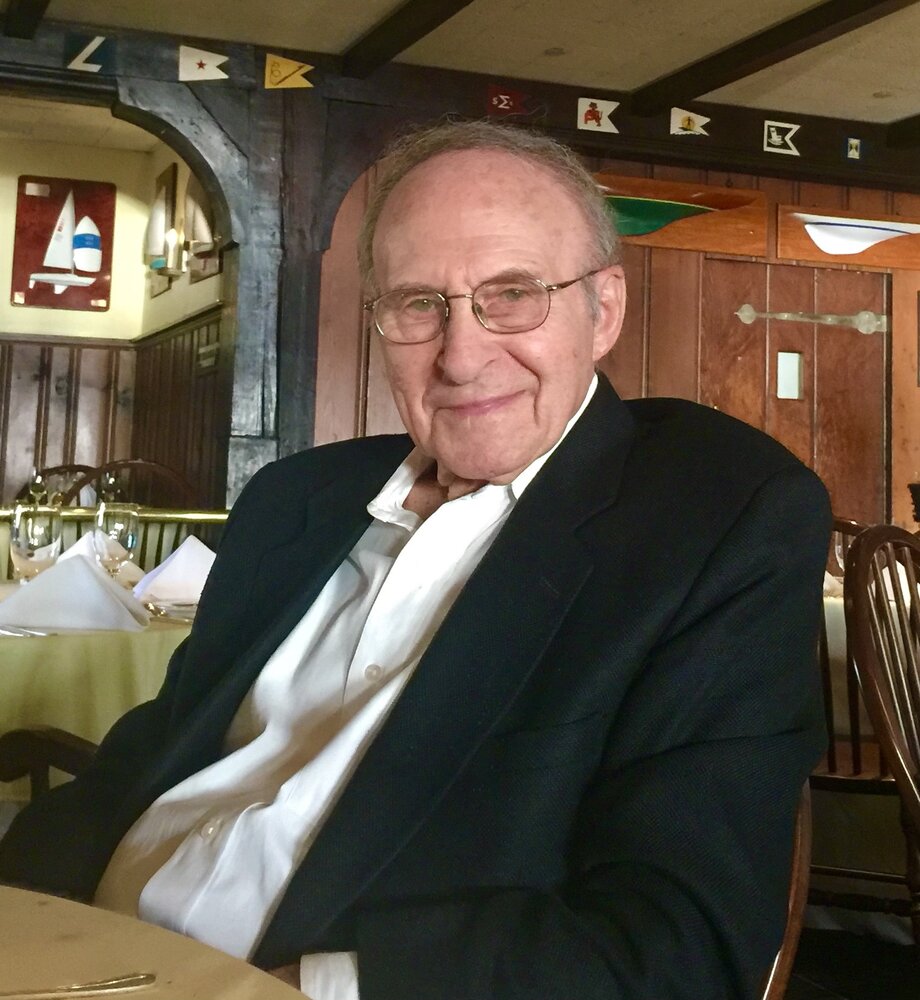 Please share a memory of Eugene to include in a keepsake book for family and friends.
View Tribute Book

Gene was born on July 29, 1925 in Williamsburg, Brooklyn, where he grew up during the depression along with his five sisters and his brother. Following his brother into the army in 1943, Gene served in both the European and Pacific Theaters in World War II, including on the ground in France and Germany and in the Philippines and Corregidor, rising to the rank of Staff Sergeant. After his honorable discharge in 1946, Gene went into various lines of sales businesses before landing a job as a salesman with men’s sportswear manufacturer Robert Bruce. Starting as a salesman with a large territory and few customers, he rose to eventually become Executive Vice President of Marketing, including the marketing and development of both the Arnold Palmer golf-wear and Jimmy Connors tennis-wear lines of sporting clothes. After leaving Robert Bruce, Gene started his own international sales business, Gamell Associates International, representing various manufacturers in the sportswear and clothing industry around the world and to the U.S. Military.

In 1950, Gene met Myra Simon, a stunning young radio and early-television actress (stage name Myra Martin), and they eloped and were married in 1951. They had three children, Mark, Tracy and Lisa. Originally living in Brooklyn, then at the beach in Belle Harbor, Queens, Myra and Gene moved to Sands Point, Long Island in 1978 and became active members of that community (often stirring up trouble to protect landmark trees and the character of the village). Gene also started a side business with Myra, Gamell Productions, and together they produced over a dozen years of dinner-theater productions in the New York Metropolitan area, eventually operating three Actors Equity union theaters at once. Gene was the producer/budget and finance master, and soother of artistic temperaments. Together they launched and nourished the careers of many performers who went on to become well-known television actors.

After retiring, Gene continued to pursue his great passions well into his 90’s – raising garden vegetables, playing and following his beloved game of tennis, investing and following the stock market, and doting on and spoiling his entire family.

Gene was instantly likeable to everyone he met. Perfect strangers would meet him in the supermarket and within minutes he had befriended them. He was quick with a witticism or joke, loved to smile, and his warmth was irresistible. He was a “people person,” reveling in finding out what was important to people and talking to them about it, having friends visit, and no Summer visitor at Sands Point ever went away without prize tomatoes and cucumbers that Gene had let them pick. He was generous, warm, funny, a great dancer, and terribly charming. Many have said “It was impossible to not love Gene.”

Gene and Myra’s middle child, daughter Tracy, is developmentally disabled, and that gave rise to their other great passion – fundraising for AHRC, first the New York City chapter, and then for Nassau County AHRC. They were founding members of the Camp Loyaltown Auction Committee, raising hundreds of thousands of dollars for this camp for nearly five decades. Camp Loyaltown, located in Hunter, New York, is uniquely designed and operated to provided developmentally disabled children and adults a safe, sleep away camp experience, open air outdoor activities and adventures, including therapeutic swimming, while providing their often exhausted parents and caregivers with a welcome respite to recharge their own energy and relationships. Gene not only raised money for Camp Loyaltown until he was 94, he created an armada of supporters, often charming total strangers into donating items for the next auction event while always making them feel glad to be part of this wonderful cause.

Listen to some interviews with Gene at Eugenegamell.org

The family would appreciate contributions in memory of Gene to be made to AHRC Foundation, by check to: AHRC Foundation, 189 Wheatley Road, #3, Brookville NY 11545 Attn: Camp Loyaltown, or online at: https://secure.ahrc.org/site/Donation2?df_id=1501&1501.donation=form1.

Listen to some interviews with Gene at Eugenegamell.org (starting March 25, 2022).

Share Your Memory of
Eugene
Upload Your Memory View All Memories
Be the first to upload a memory!
Share A Memory