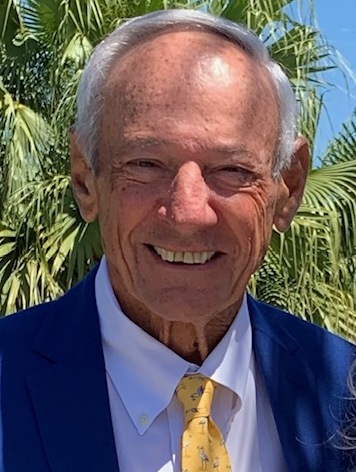 James (Jim) Joseph Baranello, of Manhasset, NY, and Stuart, FL passed away Wednesday, August 18, 2021, in Stuart, FL after complications from heart surgery. Jim was born to the late Giacomo (James A.) and Anna Miranda Baranello in Queens, NY on November 11, 1941.

Jim pursued his education from Nasson College, Springvale, ME where he obtained a Bachelor of Arts degree in 1963.  During Jim’s construction career, he was a Developer, Construction Manager, as well as a General Contractor for his family-owned business.  Later in his career he was an Arbitrator with the American Arbitration Association.

Jim, also known as “Boomer” by his friends, was witty, fun-loving, and full of life. He was the true definition of a gentleman.  He was an avid golfer, loved to play his collection of guitars, sport shooting, and listening to country music while driving his restored 1948 GMC pickup truck.  He was known to tell many stories and enjoyed a drink before dinner along with a good joke.  Beyond his hobbies he was very active in his community, Mariner Sands, in Stuart, FL as well as a former member/ board member at North Hills Country Club in Manhasset, NY.

He is survived by his wife of 8 years, Helen Ann Baranello of Stuart, FL.  Jim’s first wife of 48 years, Charlotte Reissmuller Baranello, predeceased him on July 24, 2011.

He was the devoted father of James Jr. (Tara), Andrew (Lauren) both of Manhasset, NY, Steven (Jennifer) Bluffton, SC, and Suzanne Hess (David) of Garden City, NY, as well as his two stepdaughters Amanda Campbell (Ryan, Declan, and Cillian) and Glee Campbell (Jason).  He was also the cherished Grandpa, “Gramps” and “Poppy” to his 9 grandchildren: Jimmy, Drew, Alex, Kaitlin, Jack, Marielle, Christopher, Ryan, and Miranda. Jim will also be remembered by his youngest living sister Therese Simonetti and all of his nieces and nephews of his predeceased older brother John (Johanna) and older sister Marie Pedlow (Frank).