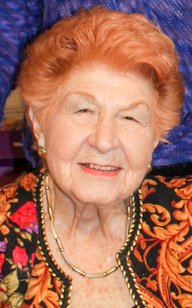 On December 31, 2019 Ann Juliano Jawin passed away at age 97. Founder of The Center for the Women of New York, she was an educator, author and activist who was part of the “Second Wave” of women’s liberation in the 1970’s and a very active member of her community. She is survived by her sons Ronald and Paul Jawin, her grandchildren Alixandra, Rachel, Erica and Tom Jawin and by many other relatives. Ann Juliano Jawin was born in Barnesboro, Pennsylvania on May 29, 1922. Her family moved to Brooklyn, New York when she was a child and she remained a New York resident thereafter. After graduating from Hunter College, she met and married Edward H. Jawin, who passed away in 2008. Ms. Jawin began her career as a high school teacher and became a Guidance Counselor. She was always active in political movements including opposition to the Vietnam War and support for civil rights and the rights of Italian-Americans and women. Ann and Edward Jawin were founding members of the Bay Terrace Civic Association and the Doug-Bay Civic Association. Ms. Jawin was very active in local democratic politics. She served as a State Committeewomen and ran for the NYS Senate against Frank Padavan. She joined the National Organization for Women and became Chair of the Task Force for Education and Employment. In 1979 she published A Woman's Guide to Career Preparation: Scholarships, Grants, and Loans. In 1987 Ms. Jawin founded the Center for the Women of New York (CWNY), a voluntary, non-profit organization that is a one-stop, walk-in resource center for women. CWNY focuses on issues impacting women, including domestic violence, sexual harassment, healthcare, employment, crime prevention and victims’ services. Over the years, the programs have grown to include a weekly Job Readiness Workshop, career counseling, a help line, a Legal Assistance Clinic, a Money Management Clinic, Support Groups for crisis situations and life issues, instruction in computers and other job training courses. CWNY’s new location in Fort Totten, Queens will allow resumption of programs in self-defense, English As a Second Language, General Equivalency Diplomas, and a Walking Club. Ms. Jawin was honored by the New York City Police Department at its 3rd annual women's history month breakfast at the NYC Police Museum on March 14, 2012 and was featured in the Veteran Feminists of America, Inc’s Pioneer Histories Project. Please make donations in her honor to the Center for the Women of New York.

Share Your Memory of
Ann
Upload Your Memory View All Memories
Be the first to upload a memory!