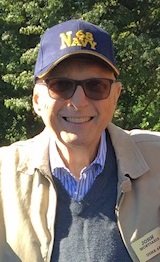 John N. Mortsakis, age 73, passed away on August 9, 2019. He is survived by his wife Kathy, his daughter Yasmine, his son Dimitri, his two grandchildren Costa and Khloé, his adored dog Copper, his brother Spiro and wife Callie and their children and grandchildren, his sister-in-law Pattie, brother-in-law Steve, and many godchildren. John and Kathy shared 35 years of marriage together during which they created a loving and beautiful home and family. His loyalty to his family and friends, and theirs to his, was undeniable. He found joy in entertaining, especially the famous 4th of July parties in Southampton. John was always there to help his family and friends and was deeply committed to ensuring their happiness. He was a friend, a carpenter, a doctor, a “Johnny-on-the spot” to any and every person in his life. Everyone who met him gravitated to his amazing and unique sense of humour.

John was born in New York City to Nicholas and Alexandra. He attended Brooklyn Tech High School where he was a star football player. He was honored this year by being inducted into the Brooklyn Tech Football Hall of Fame. Upon graduating, he was accepted into the United States Naval Academy in Annapolis. He deferred his acceptance for a year, as he was too young to attend, and went to the New Mexico Military Institute.

John was honored to be a Midshipman at the U.S Naval Academy and then serve his country as a Lieutenant on nuclear submarines in the United States Navy upon graduating from the Naval Academy.

John went on to work at National Shipping and Trading Company, where he worked for 26 years as VP of Operations. He enjoyed volunteering his time and talents at the Greek Orthodox Church of the Hamptons. He would proudly help chop pounds of onions and peel potatoes for the annual Greek Festival at the church. He also enjoyed organizing the candles on Sundays and was an integral member of the church community, in which he developed many close friendships.

John will leave a void in the lives of many and will deeply missed.

The Visitation of John N. Mortsakis will take place on Sunday, August 11 from 2-4 pm and 7-9 pm  at Fairchild Sons Funeral Home, 1570 Northern Blvd , Manhasset, NY. The funeral service will be held on Monday, August 12 at 11:30 am at St. Paul’s Greek Orthodox Church at 110 Cathedral Ave , Hempstead,NY.  The burial will follow at Maple Grove Cemetery.

In lieu of flowers John expressed that he would love any donations be made to his beloved Greek Orthodox Church of the Hamptons, Kimisis Tis Theotokou