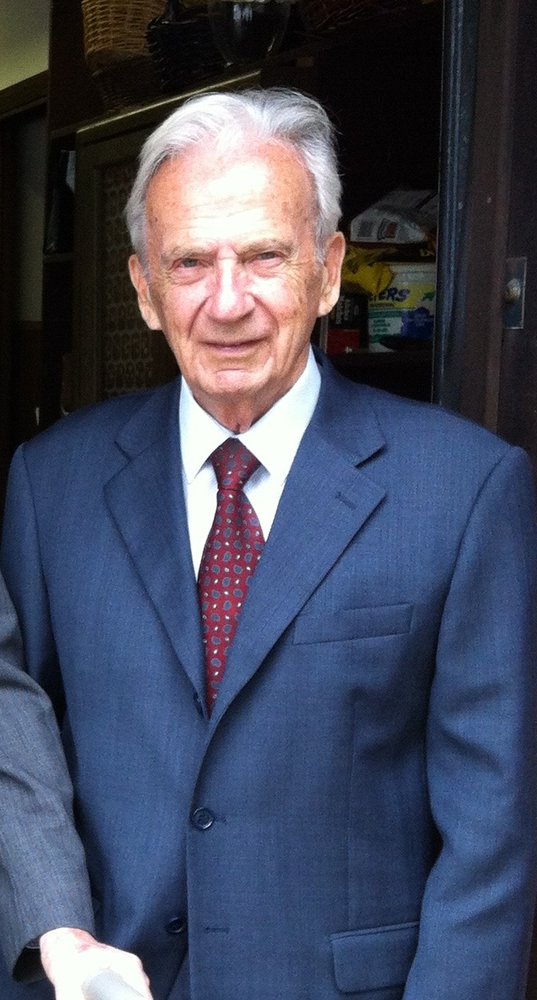 Please share a memory of Demetrios to include in a keepsake book for family and friends.
View Tribute Book
Demetrios C. Pappas, also known as Jimmy Pappas, learned Byzantine chant from his father Constantine Pappas from a very early age at the St. Demetrios Greek Orthodox Church in Astoria, New York. Constantine Pappas also began a cantorial society known as Romanos O Melodos which Jimmy continued to direct for years after his father retired. After attending New York City’s specialized High School of Music and Art, Jimmy earned his BA from Columbia University and his Master’s Degree in Music in 1959 from Columbia University’s Teacher’s College. He published several works of Byzantine Music transcribed into western notation over the years including The Greek Orthodox Hymnal, a near 400 page volume of music, including settings of the Divine Liturgy, hymns of the Saints and the sacraments of the Greek Orthodox faith. A copy of the work is housed at the New York City Public Library at Lincoln Center. During World War II Jimmy served our nation in the United States Army as a sergeant in Japan assisting in the post-war efforts. Upon his return to the States, Jimmy became the choir director at St. Eleftherios in Manhattan. He started a choir at Zoodohos Peghe in the Bronx in 1948 and also formed the popular GOYA Chorale in the parish. He went on to serve as choir director at St. Paul’s in Hempstead and the Transfiguration of Christ in Corona. In 1979 Jimmy became the choir director at St. Demetrios in Jamaica. From 1999 Jimmy served the Church of the Holy Resurrection in Brookville until 2010. Jimmy taught music at the Theological School at Holy Cross, in many of our parochial schools in the metropolitan area and at St. Basil’s Academy. For many years he led choir members from churches in New Jersey to sing in Asbury Park for the Elevation of the Holy Cross liturgy in September. For over 30 years, Jimmy formed groups of singers to chant vesper services at churches throughout the region. He conducted combined choirs at three Clergy-Laity Conferences. In addition, Jimmy was a member of the Collegiate Choral for 13 years, singing under the direction of the legendary Robert Shaw. Jimmy was recognized and received countless honors including the National Forum of Church Musicians Saint Romanos O Melodist Medallion for outstanding contributions to church music, the Educator Through the Arts Award from the Hellenic American Educational Association, the Patriarch Athenagoras Medal from the National Forum, the Archbishop’s Years of Service Award for serving as a choir director for over 25 years and he was recognized in 1998 by the Clergy-Laity Congress for 50 years of service as a choir director. He was honored with a gala concert in 2010 by the parish of the Church of the Holy Resurrection in Brookville, received the Archdiocesan Medal of Saint Paul in 2012 and the local federation scholarship was named for him in 2014. Jimmy recorded authentic Greek music as well using traditional Greek instruments and vocals in his series of YA’SSOU! record albums. The Amphion Choir, formed by Jimmy in 1957, recorded the YA’SSOU! records in the 1950’s and 1960’s. He continued to teach and perform these beautiful, nostalgic songs to choir members over the years organizing concerts in many parishes.

Share Your Memory of
Demetrios
Upload Your Memory View All Memories
Be the first to upload a memory!
Share A Memory