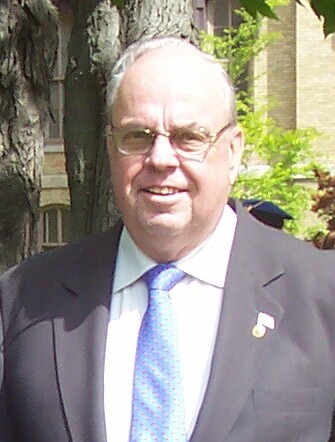 John Francis Keitz of Plandome Heights passed away at North Shore Hospital on September 16, 2022, one day after suffering a heart attack at home. He was predeceased by his wife Catherine and his brother, Rev. Bernard L. Keitz, O.P. He is survived by his brother and sister-in-law Edwin and Jean Keitz of Annandale, Virginia. He also leaves his eldest son and daughter-in-law, John and Kathleen, and their sons, Fearghus and Conor, of Fallon, Nevada. His second son, Matthew, lives in Danbury, Connecticut.

John was born in 1940 and raised in Irvington, New Jersey. His father died when he was eleven years old. His older brothers left home for the seminary and to serve in the U.S. Air Force overseas, so his mother, who had been a stay-at-home mom, pressed him into helping with their lives. He lied about his age (as the minimum working age was twelve) and took a job delivering papers for the Newark Star Ledger. He started out at every day at 5 A.M. and delivered 215 papers before school, on what was once the largest paper route in the state of New Jersey still delivered by a single boy on a bicycle. After school, he worked for a grocery store delivering orders.

An outstanding student, John won a full academic scholarship and attended the College of Engineering at New York University, where he obtained a B.S. degree in Engineering Physics. Having been in the ROTC, he was commissioned an officer in the U.S. Air Force, and went to Texas A & M University for graduate school to study meteorology. After three years as a weather officer at McGuire Air Force Base in New Jersey, John came to Manhasset to work for R. Dixon Speas Associates, an aviation consulting firm. At Speas, he worked on a novel computer flight planning service to optimize route planning and fuel use for airlines. In an age when many people had never seen a computer, he used his meteorological expertise to incorporate wind and weather weather forecasting into the program, which was eventually used by more than forty airlines worldwide.

John's most memorable accomplishment at Speas was his work as technical adviser to the Royal Commission of Inquiry into Bilingual Air Traffic Services in Quebec. The Commission, led by three justices of the Supreme Court of Canada, was charged with deciding whether it was safe for the local pilots in Quebec to use the French language in air traffic control, even though the worldwide standard was English for all international flying. John spent two years commuting from Manhasset to Canada every week, observing operations in simulators and control towers, reviewing past accidents, and testifying before the Commission. Eventually the Commission ruled that using French was safe, and there has not been an accident in Canada that involved a misunderstanding between pilots and air traffic controllers.

While working at Speas, John returned to NYU to seek his Ph.D. in meteorology. He completed all the course work, but quit before finishing his dissertation. He settled for an M.S. in Engineering Management at C.W. Post, Long Island University.

In 1983, John and his partner William Bath founded BK Associates, Inc. in Manhasset, where they primarily worked in commercial aircraft appraisal. Along with some colleagues, they founded the International Society of Transport Aircraft Trading (ISTAT), which today has 1700 members from every part of the aviation industry. John was a member of the Board of Directors of ISTAT and Chairman of the International Board of Governors of the appraiser program, a sub-group which monitors appraisal practices and ethics. He was an ISTAT Senior Certified appraiser and, as of his retirement, was one of four appraisers named a Fellow of the society. Since its founding, BK Associates has appraised more than 80,000 aircraft representing more than $100 billion.

John was active in the Manhasset community as well. He spent twenty-seven years in the St. Mary’s Choir, and had the privilege and pleasure of participating in the choir's 1988 concert tour of Italy, which included a performance before St. John Paul II. John was also a member of Manhasset Post 304 of the American Legion, where he served two terms as Vice Commander and one as Commander.

John spent twelve years on the Board of Trustees of the Village of Plandome Heights, and was mayor of Plandome Heights for ten years. According to John, he wanted to be mayor for three reasons: First, it got him out of jury duty; second, Newsday would probably publish his obituary, since they always seem to include village mayors; and third, the pay was good. (It was an unpaid job.) His proudest accomplishment as mayor also came from his background as a meteorologist. Before he was in charge, the villages always paid for snow removal by the hour. As a meteorologist, that didn't make sense to him. “I don’t care how many hours you work,” he said. “You may have a big truck, a little truck or a bunch of guys with shovels. What matters is how much snow you remove.” In the middle of that winter, he asked the contractors to submit new bids priced by the number of inches of snow, and within a few weeks there were two large blizzards. He saved the village about $70,000 that year, and other villages around Long Island copied his approach.

St. Mary's Church in Manhasset will hold a funeral Mass for John at 10:15 AM on Friday, September 23. There will be a wake at Fairchild Sons at 1570 Northern Boulevard from 3-5 PM and 7-9 PM on Thursday, September 22. In lieu of flowers, please send donations to the Dominican House of Studies in Washington, DC, which prepares seminarians for the priesthood, or to the St. Francis Hospital Foundation