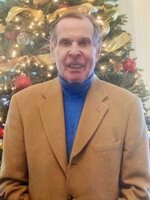 He was born on March 27, 1936. His parents, now deceased, were John and Maude Kaelin Dalton. He graduated from Chaminade High School, where Jack was a star athlete. In 1953, he was the Varsity Quarterback on the team that won the NYC Catholic High School Championship.

He was also on the 1954 Chaminade Basketball team that won the Knights of Columbus Tournament, a venue for many of the Catholic high schools in the New York area.

He graduated from Holy Cross College in 1958. Thereafter, he served for 2 years on active duty as an Officer in the US Navy.

He maintained his own law practice in Port Washington, New York, for more than 50 years. On one occasion, he won a case in the Nassau County Surrogate’s Court with such a unique theory that the decision was the subject of an article in the New York Law Journal, on the first page, above the fold.

Jack was licensed as a CPA in New York and a lawyer in Florida.

Jack also received an LL.M. in Taxation from the New York University School of Law.

Jack was predeceased by his wife, Maureen McGovern (Rosemont College, Class of ‘65).

Jack and Maureen met in the Hamptons, Long Island, and were married just eight months later. At the time of the marriage Maureen was a buyer (later a merchandise manager) at Bloomingdale’s, and as such, she introduced Jack to the world of high fashion.

Prior to the Pandemic, Jack was the moderator of the Round Table, a group discussion lunch meeting at the Manhasset Bay Yacht Club for several years. Attendees were enthusiastic about the agendas that Jack presented.

Jack was also a member of the local Jewish Community Center (the “JCC”) where he used his Catholic education to address questions from the other members about Catholicism. The topics presented at the JCC taught Jack about the rich culture and religion of the Jewish people. For a long time Jack was the only Christian member of the JCC discussion group.

Jack served on the Board of Directors of Hospice Care, and, in addition, was the Chairman of the Port Washington Community Chest Fundraiser.

Jack travelled the world with an emphasis on Paris.

In lieu of flowers, memorials may be made to Chaminade High School, 340 Jackson Avenue, Mineola, New York 11501.