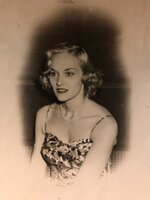 Barbara was born on July 1926 to Clarence and Genevieve Kerr at Geneva General Hospital.  She loved playing with her older brother Winston, and sisters, Alice and Patricia as she grew up.  Some fun games were playing with dolls with the girls and chasing the ice truck with the other children to pick up chips to eat. As a teenager Barbara helped other young people growing victory gardens at the Hobart and William Smith college near Seneca Lake. Barbara went on the Geneseo State College to study nursing first and later education. After graduation she went down to Long Island to live in a rooming house in Stewart Manor with a nice German lady and she taught in Valley Stream. Later she went with a friend to teach English to children in an American school in Havana, Cuba.  There she met John J. Morrissey poolside, President of Southern Oxygen Co. at The Hotel Nacionale. They became friends with Ernest Hemingway in Havana.  John and Barbara became engaged and after they wed in New York City, they honeymooned in Europe and started a family, living in an apartment on Central Park West. They moved to Manhasset in 1959 and had four children all together, Barbara, Sheila, Mary and John. As the children grew, Barbara was very involved in Girl Scouts in Manhasset and the Congregational Church (where the family worshipped) Sunday school and Woman’s club, and later started New Horizons Club. Also, throughout the years, the family belonged to North Hempstead Country Club. They swam there in the summers.  Barbara worked as the children grew older as a teacher and Library Specialist at Main Street School in Port Washington. She gave her time to her family and many happy holiday and birthday celebrations.  She sang in the choir at the church, was a Girl Scout leader, they planted gardens in Manhasset, had bake sales, drama productions, earned badges and sang Christmas carols to the homebound. Also, she enjoyed being involved with the Manhasset Republican Club, the Manhasset Post of the American Legion as a past president, the Manhasset Port Washington Kiwanis Club, she was also a member of the North Riding Chapter of the DAR, representing these groups marching with her friends in the Memorial Day parade and singing at Memorial Field in honor of our veterans.  She was also very involved in Nassau County politics, enjoying campaigning and friendships. When John passed away in May 1970,  Barbara was teaching and volunteering and raising her children.  She met her beloved second husband Thomas T. Pierce of Pierce Country Day School and Camp through mutual friends. They fell in love and married in April 1975. Together they had nine children, Barbara, Sheila, Mary, John, Pinky, Tommy, Douglas, Debbie and Greg. She had several new brother and sister in laws too. Barbara worked as an event coordinator at the Nassau County Dept. of Cultural Arts at Chelsea Museum in East Norwich where she made many friends,  also as a real estate agent at Coldwell Banker. She sang with the Gilbert and Sullivan Light Opera Company. Barbara has four children, five stepchildren, ten grandchildren and a four year old great granddaughter. She enjoyed many activities together with her second  husband. She worked at Pierce Day Camp for several years until her husband passed in Oct. 1984. She has remained active throughout the years in her many activities, and has left a beautiful and loving legacy to her beloved children, grandchildren, great granddaughter, nieces, nephews and friends.