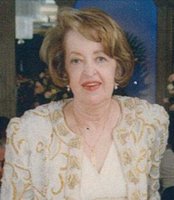 Irene Verville of Douglaston New York passed away at the age of 91 on July 1st 2021. She was the beloved wife of the late Frank Verville. Her younger brother George and older sister Mary preceded Irene in death. Irene is survived by her two loving children Matthew and Diane, daughter in law Christine, Son in law and Mauro and younger brother Jimmy. She was a cherished grandma to her grandchildren Ava 19, Jason 18, Ariana 18, Darcy 12 and a 5th up in heaven angel Austin.

Irene was born on June 10th 1930 in Detroit Michigan as Irene Theresa McNamara, the daughter of Michael and Nellie. It was in Detroit where she met her loving husband Frank of almost 60 years.

Frank and Irene eventually settled permantly in New York in 1960. Irene and Frank made their first home in Flushing Queens where their two children Matthew and Diane were born. Four years later they moved to their dream home in Douglaston Manor. Irene was a devoted mom and wife and participated eagerly in all of her children’s activities while keeping the house in immaculate shape.

Irene was an avid traveler as her and Frank embarked on many exotic trips throughout the world including Europe, Egypt, Africa and Alaska. One of Irene’s favorite pastimes was cooking and baking. She always relished in the opportunity to invite people over to share in her flair of cooking with family and friends. Some of her signature dishes included the tradition of serving shell roast and french fries at Christmas.

As her children grew, Irene took to new challenges in joining her husband Frank in the Family business Vulcan Basement Waterproofing where she worked as a bookkeeper. This involvement in the family business further enhanced their very loving bond as they spent more time together. Irene also participated at the Douglaston Club getting involved in bowling, the woman club and attending dinners. Irene was an avid movie buff attending many film festivals with her husband Frank and continued this passion right up until the end of her life.

Sadly Irene lost her loving husband Frank in 2010 but nevertheless continued to live life in a vigorous fashion as she worked part time and spent time with her grandchildren. Irene displayed unconditional love for her family and taught her children to treat others well, maintain a positive mental attitude and to look for the good in others.

Irene will be greatly missed by all who loved her especially her loving family but the memories of her will live on forever.