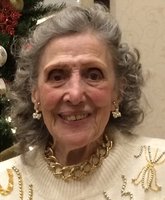 Gloria James (nee Magnifico) passed away peacefully on Friday February 19 in Glen Cove NY. Born in Brooklyn New York, Gloria is the daughter of the late Fortunato and Mary Magnifico. Gloria was preceded in death by her beloved husband, Vincent, whom she was married to for 63 years and her wonderful siblings, Emma, Louis, Lillian, George, Minna, Martha, Richard and Isabel. She is survived by her two daughters Denise (Bill), and Linda (the late Fred), five grandchildren, Tracy (Jim), Bryce (Kristin), Kirk, Andrew and Christopher and five great-grandchildren, Aislinn, Graham, Owen, Daniel and Lucas. Gloria also has 19 nieces and nephews. Being part of that extended Italian family meant continuous celebrations, food and lots of pictures and movies for keepsake. Until Gloria's final weeks, she demonstrated her determination to overcome her illness with her upbeat, feisty personality, love of God and life. Gloria, met her husband Vincent on her block as a late teen and waited 5 years for his return from WWII to marry him. She worked for the State Department during the War, attended Baruch College, married in 1945, and settled in Bay Ridge, St. Anselm's Parish where they raised their two daughters and and sent them to Catholic School. Most treasured memories were family and holiday gatherings, whether daily or weekly, with her mom, siblings and their children who lived nearby. Gloria and Vincent loved to travel, both locally with their children and abroad after retirement. She enjoyed car trips many Sundays to parks, beaches, restaurants, as well as seasonal Carnivale Celebrations, and visits with family on Shelter Island. Memories were made every year when they met their group of friends at Pine Springs in the Catskills and various local venues, relationships that were treasured for over 60 years. Gloria worked with her husband at his Commercial Photography Company in Manhattan and then at Irving Trust until she retired. In addition to their trips to Italy, spending time with their grandchildren in New Jersey and Long Island was a priority as was visiting her siblings and their families along the way. After the love of her life passed away, Gloria remained in Bay Ridge until 93 years old then moved to Senior Living in Glen Cove, reuniting with her sister Lillian for 6 months. In Glen Cove, Gloria made new friends and enjoyed many visits with family well into her late 90's. She would spend hours with family viewing photo slide shows of grandchildren, great -grandchildren and having home cooked meals during these family visits. She especially loved her visits to St. Rocco's Bakery, North Hempstead Country Club, attending Senior Monday Fundays on the beach in Port Washington and car rides to see the local scenery. Gloria loved her family, her home in Bay Ridge, and her flower garden. We were blessed to have her for almost 100 glorious years! A Virtual Wake will be made available on Fairchild's website on Wednesday, February 24, between 9:30 - 11am . In lieu of flowers, please consider making a donation to the Breast Cancer Research Foundation or a charity of your choice.