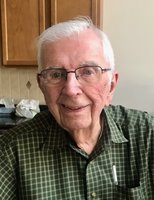 Arthur Francis Matthews 1928-2021 Arthur Francis Matthews, 92, of Port Washington, NY, passed away peacefully at Mercy Hospital in Rockville Center, NY on January 11, 2021 as the result of complications from COVID-19. Affectionately known as “Matty” or “Artie” he was the devoted husband of Margaret Dorothea (“Dotty”) for 67+ years. Born on August 15, 1928 in Brooklyn, NY, he was the youngest child of the late Mary and Walter Matthews. He grew up on Hancock Street in Brooklyn. In his early 20s, Matty joined the U.S. Army and was deployed to Japan where he served his country during the Korean War. In New York City, Matty met Dotty, and they married in 1953. The couple was blessed with four children. Matty joined the New York City Police Department (NYPD) while simultaneously pursuing his college education, ultimately earning a B.S. degree in Business Administration from St. John’s University. He was employed for 28 years with the NYPD, rising to the rank of Lieutenant. He also served as Vice President of the Lieutenants Benevolent Association (LBA), a law enforcement labor union. After leaving the NYPD, Matty continued his education and embarked on a second career with Con Edison as a Labor Relations Administrator. He was employed with the Manhattan-based energy company for 16 years. Matty will be remembered as a warm, generous and fun-loving guy who never knew a stranger and appreciated a good celebration. A true champion of others, he was known to be a wonderful mentor and always supported the goals and dreams of those he loved. He enjoyed gardening, reading, and history, and had a lifelong passion for travel. Matty is survived by his wife, Dotty, as well as four children and their families: Dolly (Michael Freeburg), Marianne (Jay Anderson), Mark, and Jeannie (Brian Ensor). He also leaves his beloved grandchildren: Eric, Dexter, James and Audrey.