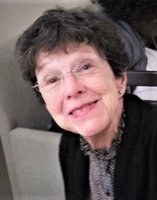 Caroline Simpson Brown, 83, died Saturday, August 24, 2019, in Great Neck, New York. She was born in Birmingham, Alabama, on January 2, 1936, to Dr. John William Simpson and Emily Robinson Simpson. She was their only child. Caroline is survived by her daughter Amy Simpson Brown (Stephen Popovich) of Port Washington, New York, and her son Charles Simpson Brown of Little Rock, Arkansas.

Growing up, Caroline attended the Brooke Hill School in Birmingham and spent summers at Camp Nagawicka in Delafield, Wisconsin. She enjoyed both immensely. Caroline graduated from Vanderbilt University in 1957 where she was a member of Kappa Alpha Theta. She moved to Little Rock, Arkansas, in 1957 following her marriage to William D. (Bill) Brown. Once in Little Rock, she enthusiastically joined and participated in numerous service and social organizations and made many lifelong friends. She also enjoyed many wonderful travel adventures with Bill and close friends.

Caroline worked for Poe Travel for a number of years following her divorce in 1977. She later served as manager of the Arkansas Artists Registry at the Arkansas Arts Council. She had a deep respect and appreciation for the artists of Arkansas and diligently supported and promoted them through her work at the Registry. Caroline retired from the Arkansas Arts Council in 2001. In July 2018, she moved to Great Neck, New York, to be near her daughter.

Caroline was gracious and kind. She was a loyal friend. She was also enthusiastic and curious and spent her life trying to better understand herself and the world around her. Her warm smile, ready laugh and good humor made life brighter for those who had the good fortune of knowing her. She courageously lived with cancer for two years. She approached her diagnosis, treatment and recurrence with quiet determination and grace. Once treatment was no longer an option, she accepted hospice care with gratitude. She died at home surrounded by family. Her children will be forever grateful for her unwavering love and support and will miss her dearly.

A memorial service will be held in Little Rock, Arkansas, at a later date. In lieu of flowers, memorial donations may be made to the Cradle Foundation (www.cradlefoundation.org) or the Humane Society of Pulaski County (www.warmhearts.org).