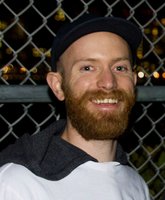 Richard, 32, of Greenpoint Brooklyn lived and died as a burgeoning Renaissance Man. He is survived by his wife, Marisa Kompar, and their two children, Finnegan, 4, and Theodore, 10 mos. Born in Mineola and raised in Port Washington, Richard spent his knee-bruising youth in the classrooms of St. Peter’s and Chaminade High School. He continued onto Loyola and into the cubicles of corporate America. Yet, his gaze wandered. Richard pursued a self-identified vision at The French Culinary Institute of America and hopskotched from one kitchen to the next. It wasn’t until he met his wife that Richard’s trajectory became honed. The tape to his deck, the brain to his heart, they emerged together as each other’s best advocates. They called Brooklyn home, but their community extended to wherever they stood. Every step had prepared him for fatherhood, and at that, he excelled. Richard’s capacity to love speaks to his upbringing. He was surrounded in a house of open hearts and chose to share his with the world. In lieu of flowers, individuals can make an online donation at either link below. All funds will go towards the children's further education. https://www.gofundme.com/finneganandteddy https://www.gofundme.com/jqjw747q For those who wish to contribute via check, please make the check out to Marisa Kompar and mail to Marisa Kompar, 118 Luquer Road, Port Washington, New York, 11050 If you're coming in from out of town, we have several friends/families who have offered up beds in their homes. Please reach out to the Oates Family regarding the number of beds you'll be needing (and the specific night) & we will connect you appropriately.